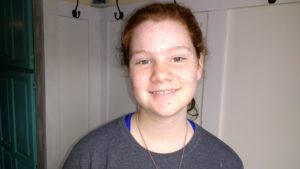 Jaelyn at home before leaving 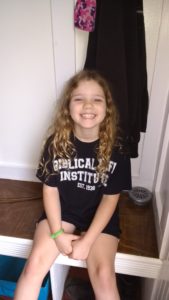 Juliette the morning we
left

I found that Georgia and Alabama look a lot like South Carolina from the interstate, lots of trees and lots of green- even in the winter.

We drove until we reached Oxford, Alabama.  We decided we would stay overnight in the Walmart parking lot.  I called Walmart and asked permission before our arrival. I downloaded the app RV Parky that allows you to search near your location for gas stations, Walmarts, RV parks and more.  So this was our first Walmart ‘boondocking’ experience.  Staying overnight at a Walmart while on the road seems to be a pretty common thing among RVers so here we go. 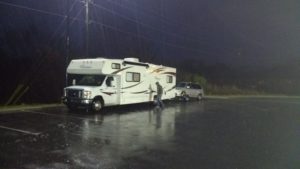 It rained all the way to Alabama and it was pouring as we arrived at Walmart.  We weren’t alone in our choice of parking lot, there was another class C RV across from us that spent the night as well.  We had a visitor, I guess it was to christen us to the Walmart boondocking experience.

We had a knock on the door of the cab.  It was a gentleman who told us that he had been at his Daddy’s cabin in Birmingham to winterize the place before the upcoming winter storm that the south is so unaccustomed to.  He stated that he lives in Atlanta, drove to Birmingham to the cabin and left his wallet on the dash on his Daddy’s pontoon boat.  He told us that it would cost him $150 for a wrecker to bring him some gas in order to be able to make it back to Birmingham to retrieve his wallet. He explained that he only needed 4 or 5 gallons of gas. He pointed out that he was driving a Lexus and wearing a Polo shirt and he was not in need of a bottle of wine or anything.  He offered to leave a cellphone or have Jay ride with him to guaranteed the return of borrowed money to pay for 4 or 5 gallons of gas so that he would not need to pay a wrecker.

So, we let him borrow $20.  Or I should say my daughter lent him $20 because she was the only one with smaller bills.  He asked for Jay’s last name and phone number.  Jay told him his first name and gave him his number.  The man asked where the number was from and then stated that he would return around 10:30pm and would call when he was near.  Before leaving he also offered frozen catfish, which we politely declined- we had no room for more food and he said he would return our money plus $10 more.  I was so exhausted from not sleeping the night before that I went to bed.  Before leaving I told Jay not to accept the extra $10 if indeed the man did return with the borrowed money.  The next morning I asked Jay if the man returned.  Jay’s answer- you know he didn’t.