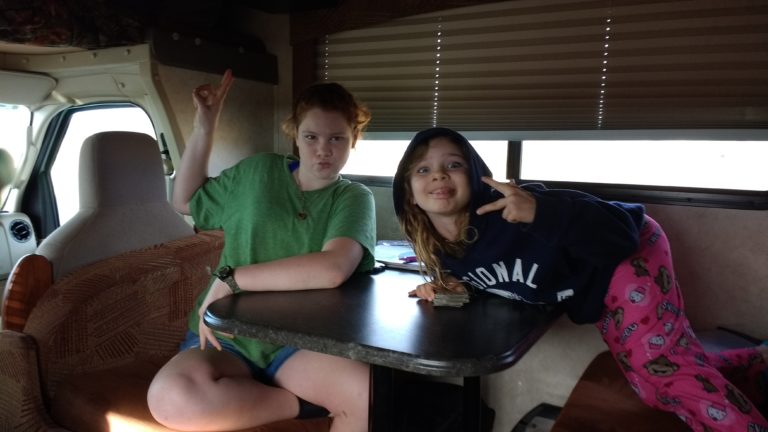 Wednesday, day 3 of the Westward journey

We stopped at a Chevron gas station at some small town about 56 miles from Lordsburg, New Mexico. The girls loved that gas station. It had all kinds of neat trinkets. I bought one my friends a really tacky magnet that says if you mess with me you mess with the whole trailer park. I can’t wait to send it to her. The girls bought arrowheads, 2 for $1 and we found some New Mexico post cards. We also got ice cream which we all enjoyed. While the girls thought that this was the best gas station ever, Jay felt that this was the worst gas station ever. We had to wait for a customer to use the pump ahead of us, before we could then use that pump. Unfortunately she and her children shopped in the gas station prior to filling her car with gas. He then waited for her to buckle the kids in and then pump her gas. When she was finished he was able to pull in into that spot and fill the RV. He told us that the gas there was more than 40 cents more a gallon than the gas station on the other side of the interstate. He said that he is not going to another Chevron if he doesn’t have to. It’s all about perspective isn’t it? We loved it, he hated it. Two different experiences, same place. A funny thing that did happen was that Jay got to talking to another man who was filling up at the gas station. The man said he saw Jay’s Carolina Gamecocks shirt and did a double take. Then he said he looked at our tag and saw it said South Carolina. He asked where we were from. Jay’s says Charleston, South Carolina, actually Summerville near Charleston (since people are usually more likely to have heard of Charleston). The guy responds that he’s from Mt Pleasant and he’s headed to Phoenix, Arizona. Jay smiles and says so are we! How funny is that? It is a small world, what are the odds?