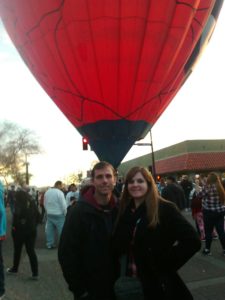 We learned from one of our neighbors a t the park that Glendale has an annual festival called the Glendale Glitter and Glow Block Party. We decided to check it out.

The Glitter and Glow party is located in downtown Glendale and begins the end of November thru the beginning of January on the weekends. Its a fun festival which boasts 1.5 million LED lights, 2 dozen hot air balloon, bands, food and rides.

We drove to Glendale and parked before the festival really began and grabbed dinner at a cute diner named The Hop Stop Diner.  We also did some window shopping as we walked past some neat shops in the downtown area. 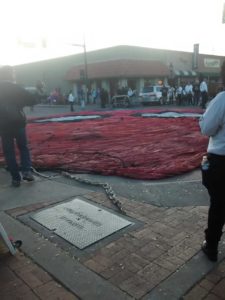 As the sun began to go down people were preparing their hot air balloons to inflate. This was my favorite part, watching these huge balloons being inflated and getting to see the unique designs of different hot air balloons.

The downtown area was decorated with tons of lights. There were lights around trees, lights in various shapes, colored lights, blinking lights, lights everywhere.

There were also all sorts of vendors selling handmade crafts. I bought the girls roses that were made from wood. Each girl got 6 in assorted colors. 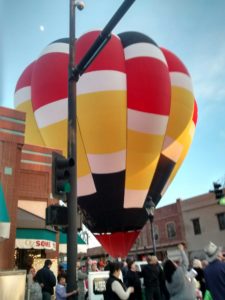 We really enjoyed the festival and our visit to downtown Glendale. Its a neat place.