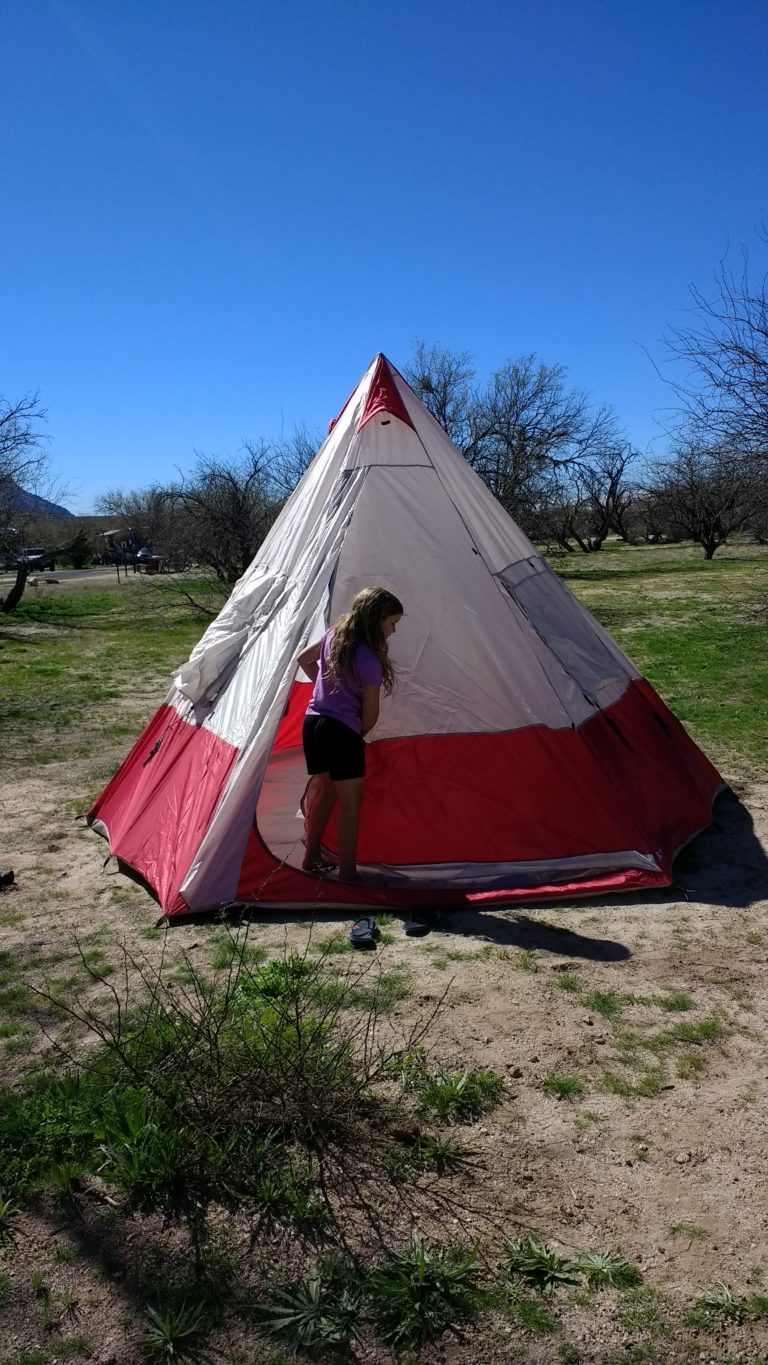 The kids were so very excited about tent camping and using their brand new sleeping bags.  I am not quite how they felt once the reality of sleeping on the ground in a tent truly sunk in the morning after our first night sleeping at Catalina State Park.  I really don’t think any of us slept well.

The first night, Friday- First of all, I was cold.  We brought our small heater and I was completely warm when we went to bed.  It was turned was on low.  I woke up several times cold and every time and I sat up to turn the thermostat up on the heater it cut on before I turned it up, so I laid back down.  My phone was across the tent so I have no idea what time it was.  All I knew is that I felt as if I laid awake for several hours.

At one point, I heard howling from different directions.  Was it a coyote or a wolf?  I do not know.  According to the reading I’ve done from the state park and the national park both occupy the area. I wasn’t really frightened, per se, but it was a little eerie.  I’ve tent camped several times in my life and only ever heard dogs howling.  New experience- check.

Somewhere around six in the morning I decided I had had enough of being cold.  I went to my van, cranked it and put the heater on high, where I then stayed for about an hour until my husband opened my door startling me and asked me what in the world I was doing. I was warm and it was heavenly and I did not care what he or anyone else thought!

Also, in the morning, the girls said they didn’t sleep well.  I don’t think sleeping on the ground bothered them too much, just the different surroundings I think.  I’m pretty sure I felt every bone in my body.

On the second night, Friday,  I decided I had learned from the previous night experience, so I made some adjustments.  I put on my jeans on over top of my sleep pants, found two extra throws, slept with my jacket over my sweatshirt and turned the heater up.  I would not be cold again! Wouldn’t you know- it was warmer on the second night?  I had to turned the heater down and remove some blankets.

I don’t think I heard any howling on the second night.  Anything that we may have heard was drowned out by the wind.  Yes, lots of wind!  I could hear it blow over the mountains and then BOOM! the tent sides blew in and out and in and out- very loud.

Thank the Lord that he gave me a sense of humor.  I blocked the noise out the best that I could, but each time I woke up I could not help but think about the perfectly wonderful camper that I have that may have made this trip so much more comfortable (yes I am spoiled and realize some people may not believe RV camping is ‘real’ camping but I don’t care!).

In the morning when I heard the ping, ping of rain on the tent I did some serious inward groaning.  Rainy weather and tent are not terms that mix in my book.  Fortunately, the rain was light and intermittent and the wind seemed to dry whatever rain hit us.

The original plan was to stick around Catalina Sate park on Saturday and do some hiking, but by the time we woke up and got moving the rain was becoming steady.  We packed up the tent and the rest of our stuff, rode around the park once more and headed back to Buckeye.

Even though I sound like I’m complaining it’s kind of a tongue in cheek kinda deal.  The camping was a little rough, but we all had a good time and we are already starting to plan the next trip.  But, like any experience, good or bad, I have learned some things.  One, I will be purchasing some thermal underwear.  Two, I will eventually be investing in a better pad for under my sleeping bag.  I’m sure there’s more, but those are my priorities!